In 1998 the Interfaith Pilgrimage made its way through Charlotte, NC, on its journey from near Boston, MA, to West Africa.

Their goal was to re-create the Slave Trade Routes — known as the Middle Passage — and in the process make stops at points of interest to pray for racial healing and atonement for the past institution of Slavery!

They arrived in Charlotte in August of 1998 and this Charlotte NC Tour  is a re-creation of their stop here in and around the Queen City where the visited 3 existing Slave Cemeteries, a former Slave church, and over 50 other sites of Charlotte history.

The Pilgrims group consisted of individuals from multi racial, ethnic, and religious backgrounds from many different States and cities across the United States. There journey spanned more than a year and concluded in West Africa where they joined a similar group that began in Europe.

They were aided along the way by common citizens, churches, and organizations that provided them with shelter, food, and in some cases local transportation as was the case when they stopped here in the Queen City and boarded buses provided by Queen City Tourssm and Travel to accomplish their goal of praying for racial healing and atonement for the past institution of Slavery here in the United States.

The Team That Delivered

Knowledgeable, well-trained, and ready to serve. Our early crew realized the importance of conveying the history of Slavery to those that either were not aware or had forgotten this prolific period of American history that still permeates the souls of those affected who are now being challenged to forget!

“If you want to be important, that’s wonderful…But recognize that he who is greatest among you shall be your servant.” 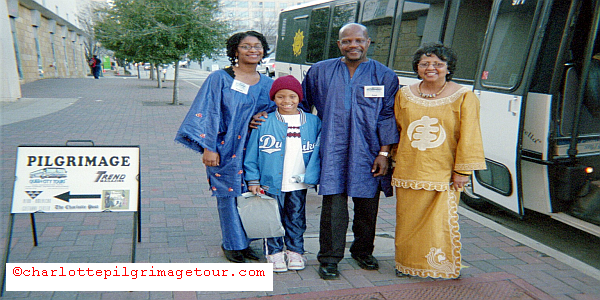